This is a place with a great deal of turbulent history. It sits at a strategic crossroads of the overlapping and competing trade routes of many empires, as they’ve surged and receded over the millennia.

After a founding period where indigenous peoples, comprising hunter gatherers from the north, who arrived forty some odd thousand years ago, and agrarian cultures from Indonesia, or perhaps Taiwan (by the latest theory), coalesced into the Malay people here… the game was afoot.

Arabs, then Indians, first pushed into the area, attracted by the prospect of a seabourn alternative to the land-based Spice Road (and its Mongol overlords). They were followed by the Portuguese, around the peak of their maritime empire, then by the Dutch, and finally the English — the latter two each with their own East Indian Trading Companies.

All of that economic value passed through these waters, a natural chokepoint in the configuration of land around the confluence of the Indian Ocean and South China Sea. Those who controlled them had the opportunity to establish a lucrative maritime toll booth… and that’s just what they did… typically in some form of power and revenue-sharing partnership with the local Malay sultanates.

Kuala Lampur (“KL”) was born of the wealth thrown off by this process.

Today’s shore excursion involved a 90 minute bus ride, each way, to visit this most modern make-over of the city with that history behind it. Until recently, it was the home to the world’s tallest buildings, the “other” twin towers.

I decided instead, quite strategically I thought, to defend the port, the ship, and its liquid possesions (in particular), from any possible attack.

I took a high ground position (Deck 9), and prepared to mount a stout defense against all comers. Alas, as of this writing my good friends, they have not arrived. Must have gotten word of my superior position and resolve. 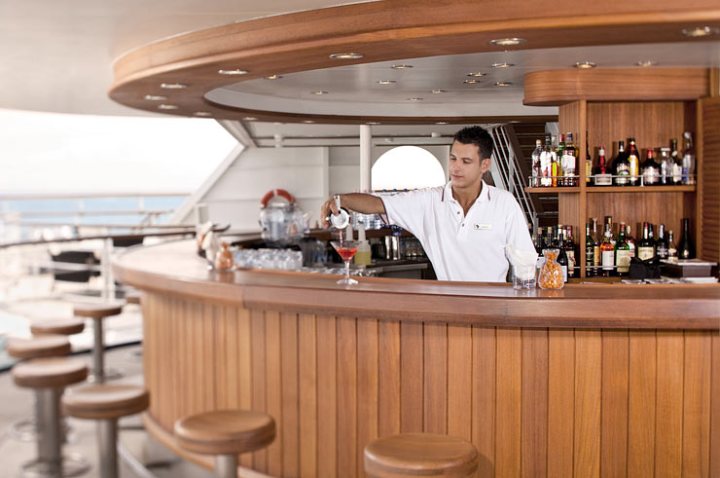 I can now retire to the evening’s festivities, proud in the knowledge that I kept the Straits of Malacca safe, at least for now, for thirsty travelers from all corners of the globe.