I’ve kept a journal, more or less faithfully, for years now. Here are my entries for the past two days. First… 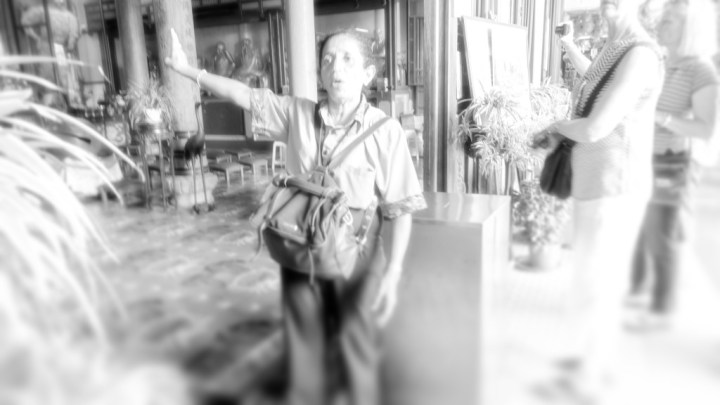 The day started with a breathless, interminable, climb of at least 900 feet vertical (seemed double that) in 90 degree, 90% humidity to a temple, Kek Lok Si (which, I think, translates to “house of the smiling new widow”), in the central highlands of George Town…

… then proceeded to two museums, each converted from the homes of their last residents, both Chinese, both owing their wealth to an admixture of speakable and unspeakable ventures in the last century.

Both patriarchs are certainly smiling now, each enjoying their respective glorious and final rewards, at the sight of busloads of tourists sweating in the unrelenting tropical climate, as tales of their business acumen and spectacular accomplishments are related… at… great… never ending… length.

Wednesday,18 March
Phuket, Thailand
Having been unsuccessful in arranging for my demise yesterday in George Town Malaysia, Ellie redoubled her efforts today.

Says Ellie, “Great, let’s take an open-to-the-elements boat trip, bound for sights that would have been spectacular, but for the unfavorable tides… and then go walkabout” on a couple of islands whose most memorable features may just have been the souvenir vendors, all in row (at “James Bond Island”) or in a rabbit warren of stalls (in the floating “Muslim Village”), who, in their torpor, did not even mount an honest effort at peddling their wares. 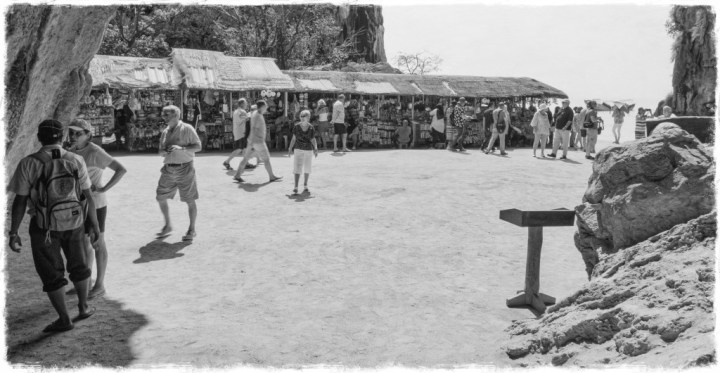 Next most memorable thing? The tour director emphasizing each opportunity to use a toilet.

A closing observation: it’s interesting how, as one advances beyond the flowering of youth, just how much effort you expend, given hours on a small craft crammed with near contemporaries clad in shorts and tees, trying to find favorable points of comparison between one’s physique and those of shipmates.

Post Post Confession: the history was actually rather interesting on day one, and the scenery spectacular on day two, and I enjoyed both in the end, (much as aficionados of S&M must enjoy their special pleasures).

Finally, I was able to confirm to my great relief that, despite suspicions to the contrary, Ellie has NOT taken out a large life insurance policy on me.