Reporting from somewhere in the Bay of Bengal…

That’s among the things I learned on our second day in country.

Again as yesterday, my education was aided by a guide — this time not a politically charged up young man — rather a charming, giggling between every other sentence, young woman. 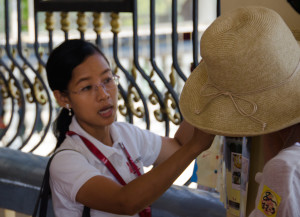 Among other tidbits I came to know through her, and via my keen powers of observation:

Some brief notes and observations from the day’s program follow…

We arrived back at Shwedagon Pagoda just in time to witness a coming of age initiation ceremony, with featured participants aged eight to eighteen, (the youngest crying, the eldest glowering) proudly accompanied by their relatives. I learned that it’s common to set the qualifying age so as to ensure that grandparents are able to witness the ceremony from this world, rather than the next. 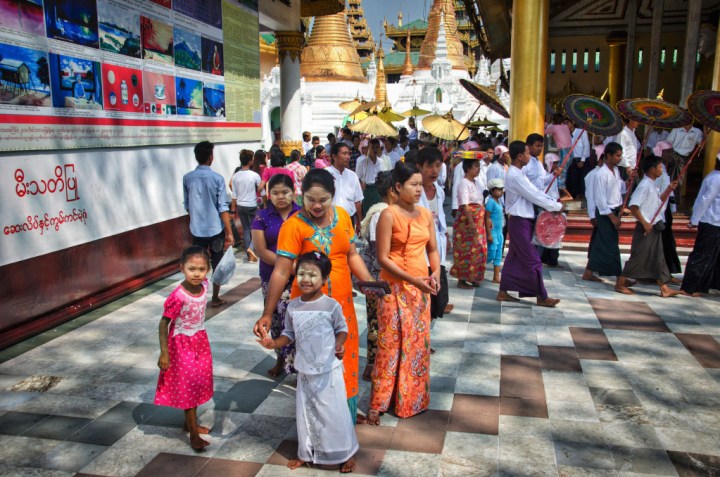 It’s amusing to be the subject of reverse tourism. Ellie and I, seeking shade, found ourselves sitting alongside a group of local teenagers… who, with hesitancy that gave way to courage, proceeded to document us at great length with their mobile phone cameras as, presumably, examples of an exotic species from a far off land.

Next stop was at a downtown open air market, timed most cleverly to coincide with the peak heat of the day. Our guide suggested caution regarding the provenance and quality of goods on offer, and expanded, “The ‘Government Registered’ designation you’ll see on many shops means that they are selling what they claim, but carries no assurances on authenticity or quality.” Crystal clear. 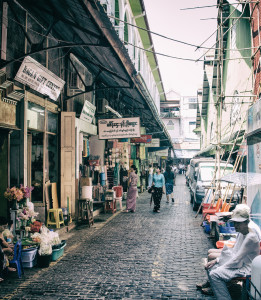 Ellie showed her creative pluck by entering one of the very few air conditioned shops, at the peripheray of the market, and negotiating — very slowly — without any intent of positive outcome — for the non-purchase of a piece of jade (a $2300 hand cooler of no distinguishing merit)… giving just enough time for the outflow of sweat from my brow to slow.

Our transition to the day’s next stop, lunch at the Shangri-La Hotel, was delayed by fifteen minutes (felt longer in the tepid coach atmosphere), by a couple who got caught up in an extended negotation toward the purchase of some local fabric. Their arrival back at the coach was met with steely glares.

That lunch, a buffet, memorable for its excellent food, blessed AC, and very pleasant chat with the Seabourn Sojourn’s captain’s wife, gave us the strength to power through the balance of the afternoon… which featured…

A photo stop at the larger of two downtown lakes in Yangon… cleaner for the workings of a pair of machines donated by the Japanese.

…The National Museum, with its modest but proud exhibits of early life in Myanmar…

… and a pavilion built to house “the fifth largest reclining Buddha” (one of three canonical poses). 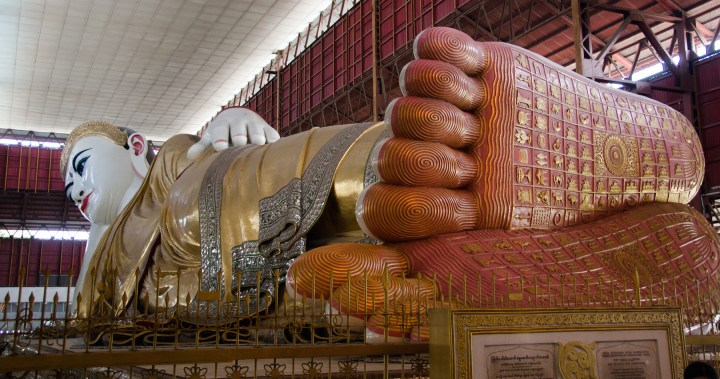 On the way back to port, our guide elaborated on the astrologically focused, mystical side, of her country…

…How the week day of one’s birth (there are eight in Myanmar, with Wednesday being divided into AM and PM) carries great import in determining your nature. Each is aligned with a corresponding creature. I’m a Tuesday baby (a Lion), reportedly ambitious by nature, but marked by a ‘sharp tongue.’ I’m shocked and appalled…

…How a first born Saturday baby (‘Tar Tei Sa Nay Thar’) is thought to bring great risk to its parents, given its supernatural powers…

…How the truth of all of this was driven home for our guide by the fact that her astrologer fortold the need for her to deliver her baby by C-section.

We left Myanmar much richer for the brief time spent there.

The experiences we had over this past weekend, while packaged and choreographed (as these sort of things always are), will live on in our memories for a very long time as not just fascinating, but as deeply revealing of human realities, and fundamentally real in all of their complexity.