Gulf of Suez,
In queue to enter the Canal
En route to Israel
60 years – 1 day

Our stops throughout this journey have been at points of intersection, where waves of successive cultures left their marks on local histories, sometimes in still distinct layers, others as ingredients in various exotic mixtures.

All have been remarkable, but none more so than our most recent waypoint — Petra, in the Hashemite Kingdom of Jordan… which we experienced as an opening of time itself, into an exotic past.

The Nabataeans arrived in southern Jordan, from what is now Saudi Arabia, around 200 BC, after years spent at a crossroads in the trade routes linking Mediterranean civilizations with those in India and China. They were masters of caravaneering, developing wealth and power, while absorbing influences from the cultures with whom they did their business.

Until annexed by the Roman empire in 106 AD, they controlled a vast swath of the region, stretching from Arabia to Damascus. Even after, they continued to thrive, owing to their adaptive nature and, one imagines, a resilience born of desert heat, cold, and winds.

They built their capital city of Petra in a canyon-carved region roughly mid-way between the Red and Dead Seas, about two hours drive on the route of the ancient Kings Highway from the port of Aqabah, where we arrived after our passage from Oman.

From the Kings Highway

The final miles of the trip lie along a road high above what is now called the Wadi Musa, beneath the looming Mount Hor location where Moses is said to have buried his brother Aaron.

The landscape is beautiful, stark, and viscerally ancient, in its tectonically folded, weathered, and re-folded layers of granite, limestone, and sandstones in their many cloaks. 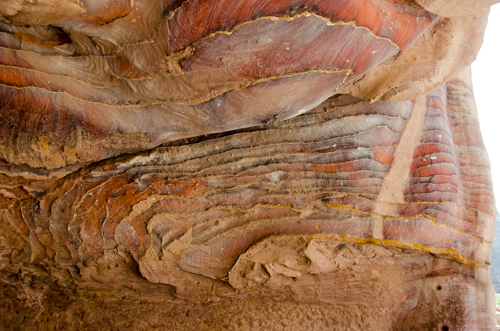 Bedouins, mostly herders of goat and sheep, make up the local population, the older ones still choosing to live in tents, often adjacent to the concrete homes of their sons and daughters.

Bedouins and their charges

Looking out on these scenes, it’s impossible not to feel that you have been transported back to biblical times.

To the south, you see the Nabataen leader dispatching his best men to scout for a suitable site to settle, and their excitement in reporting discovery of one tucked deep into the folds of the eastern extent of Wadi Araba.

Moments later, you see that same leader smile with satisfaction as he is led through the narrow As-Siq gorge, the easily defensible and hauntingly beautiful sole means of access to the site… an entry entirely suitable for the capital city of a great people. 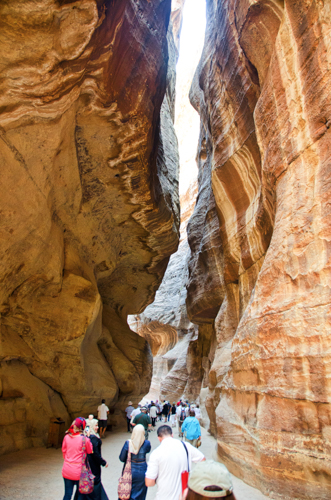 You then imagine the scene as craftsmen, using techniques and styles learned from trading partners across the ancient world, are directed to carve the city directly into the red sandstone rock walls. 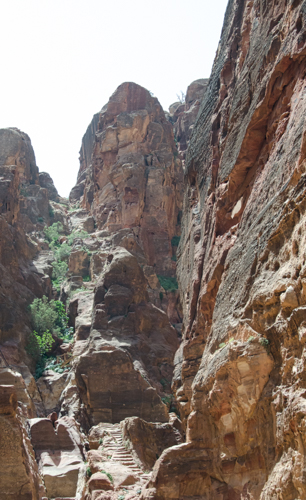 Stairs leading to ledges, used by the carvers

Over there — you see them climbing stairs, making their way across narrow ledges, and then, suspended by ropes and steadied by prepared footholds… 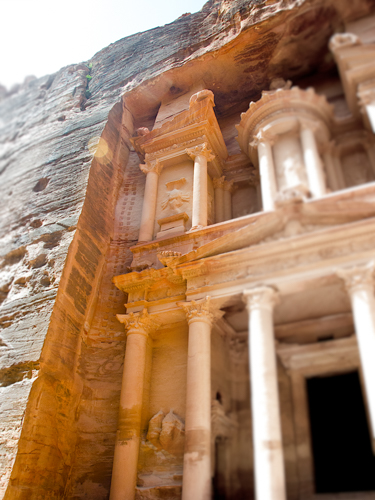 …doing their work, gradually revealing something of majesty. 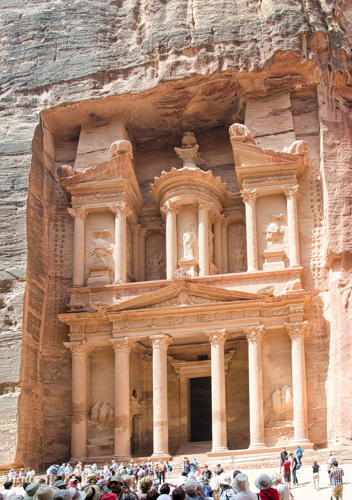 And of course you know that their sons took up and extended that work in the years to come, building out structures all throughout the valley, some little more than modest caves for themselves and their kin… 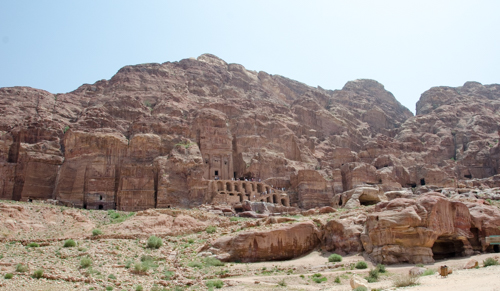 …others grand homes and tombs for the decendants of the founding leader, and theaters and public buildings for all. 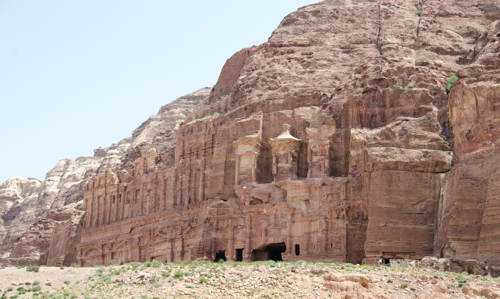 See all this through the ages, you feel great dispair as you imagine the vitality of the place collapsing in its later years, as the trade in spices grew less lucrative, and the weight of foreign rule caused the city to lose its place in the world. 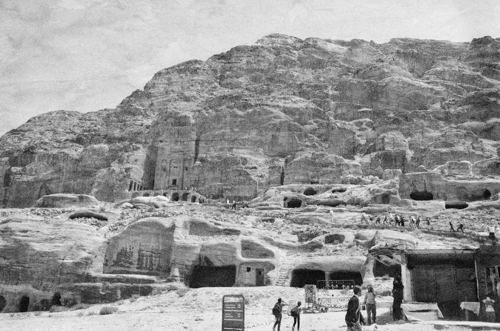 Finally, there, and over here, and above, you see the toll taken by weathering from the ceaseless westerly winds and by earthquakes emanating from the Jordan Rift Valley… with no local populace to effect repairs.

You see and feel all of this, even through the many noisy distractions of the tourist trappings that have accreted to Petra in recent years, a World Heritage site since 1985…

But wait. Those aren’t discordant notes.

They’re the here and now echoes of the commerical, indeed the human, spirit that led caravaneering people to settle in this place over two thousand years ago, and to create a work of wonder.

As we made our way back to port, gazing out from the modern coach to the passing ancient landscape, 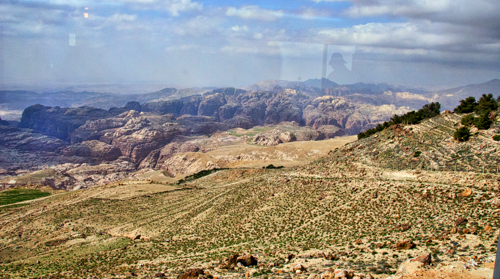 I felt my deep sense of wonder across the ages settling into what I know will be my own remembered echoes of a place, and of times long ago, and of magical times experienced on this most special journey, just as I am about to make the turn, tomorrow, into my seventh decade.