Our second of three stops as we traveled north on the Malabar Coast was at Mangalore, a medium sized trade and commercial hub, in the state of Karnataka… and a place of no particular distinction. (When I asked our guide to describe what made this place special, he hesitated at great length, and then answered something involving hotel chains founded here and ‘warm people.’)

Therein lies its value to the traveler. It provides, it seemed to me, a lens into ‘average India,’ if there is such a thing.

The port is tilted to commercial utilitarian needs. No frills. Cranes, earth moving equipment, and mounds of coal marked the landscape. It was a place at work.

Our program for the visit was also spare and workmanlike, an inland loop up and back to two stops some 60 km to the northeast: a multi-crop farm, and an important temple of the Jain religion.

On the way our guide did an admirable job of sharing bits of local history, culture, and trivia, using props liberally. 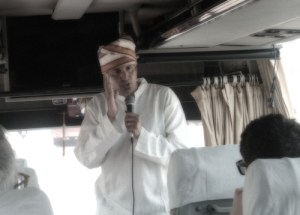 We saw examples of the variety of dress configurations used across the region. He donned a series of head coverings, and explained their use by various peoples of the region.

We saw newspapers printed in a half dozen languages, a fraction of those in use across the country — but all used in the immediate surrounding area.

We learned how cashews (an important local crop) are grown and processed. (We should be happy they don’t cost more.)

We learned that buffalo racing is a sport of great passion locally, rivaling cricket in regional popularity (and a whole lot muddier). 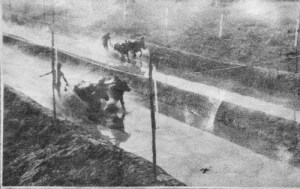 We learned that followers of the Jain religion, an offshoot of Hinduism, believe in pacifism above all — and are as a people very successful, including, notably, as bankers.

First stop after the hour long coach trip was Soans farm. It was created by a German missionary in the first half of the 20th century, and won distinction as being the first industrial farm to overcome the challenging soil conditions (through careful choice and rotation of crops). He was forced out of the country though at the start of WWII, and the current operators, brothers, took over, first on a lease from the government, then as owners.

One of them, Dr. L.C. Soans, studied agriculture in Montana, and is recognized as a leading innovator in tropical agriculture. He’s introduced over a hundred species, many of south American origin, and grows them on the farm with great success.

The groves at Soans Farm

Over the course of the hour spent at the farm, we walked the surrounding groves, learned a bit about many of the plants growing around us, and were treated to a taste of the freshest possible pineapple juice (naturally sweet and very delicious) and pepper seeds (with quite a kick to them).

Our second stop, only minutes away in Moodabidri, was the Jain temple Saavira Kambada Basadi (or “temple of a thousand columns”). Built in 1430 in honor of the tirthankara Chandraprabha, it is one of the most famous temples for people of this faith, who are all expected to make a pilgrimage to visit it at least once in their lifetime. (So, if I ever decide to convert, I guess I’m covered.) 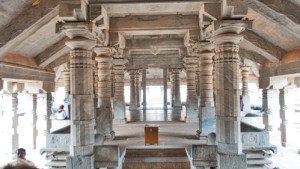 It is an impressive work, and provides a portal through which one can look back across time and into another culture. I’m glad for having experienced it.

The trip home, by a parallel route to the one that brought us to Moodabidri, had its own interests — not for any particular landmark or sight — rather for how it provided a portal into the rural India of today. Ramshackle structures, remarkable for how none, new or old, seemed finished, but all seemed dilapidated, flanked the road. Sanitation of any sort was not in evidence. People living on life’s lower rungs were very evident, in vast numbers.

Earlier, at the farm, I asked our guide whether he thought that there would be significant change in this region over, say, the next fifty years. He paused for a moment, and then shook his head “no.” This despite the acknowledged forces of globalization and economic development in the cities. The rural areas are too conservatively tied to tradition, too scattered and fragmented, and without a driving force of change. They are, like these buildings, frozen in the tropical heat.

Looking out of the coach’s windows for mile after mile on the way back to our ship, I could see that he was very likely correct…